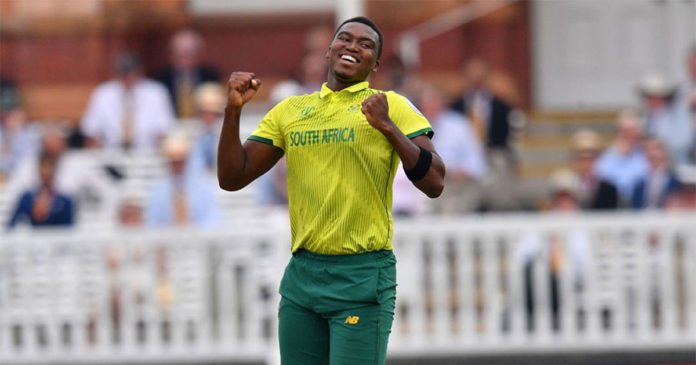 Lungi Ngidi bowled a match-winning death spell of 3/10 in two overs to earn the Standard Bank Proteas a one-run victory over England in the opening KFC T20 International at Buffalo Park, East London, on Wednesday evening.

England had looked home and dry when they went into the last six overs needing 50 off 36 balls with 8 wickets in hand but they crumbled badly in the closing overs as KFC Man of the Match Ngidi finished with 3/30, which included the responsibility of having to defend five runs in the final over to prevent a super over and he did exactly that.

Beuran Hendricks who bowled exclusively at the death also played his part with 2/33 in 3 overs while there were also two wickets for Andile Phehlukwayo.

England had bowled equally well at the death of the South African innings, notably by Chris Jordan and Mark Wood as the home side were restricted to 49 in their last six overs.

At one stage the Proteas looked as though they might get a lot closer to 200 than their final total of 178 after Quinton de Kock and Temba Bavuma put on 48 for the first wicket off only 26 balls and then Bavuma and Rassie van der Dussen a further 63 for the second wicket in 40 balls.

But the England spin duo of Moeen Ali and Adil Rashid again slowed things down with returns of 1/22 and 1/23 respectively.

The start of the England innings followed much the same pattern with Jason Roy smashing top score of the match of 70 off 38 balls (7 fours and 3 sixes).

Eoin Morgan consolidate for England with the second half-century of the match (52 off 34 balls, 7 fours and a six) but it was his dismissal by Hendricks, preceded by Ngidi’s dismissal of Ben Stokes that finally swung the game South Africa’s way.

It was the third time South Africa have won a match by one run.

Interestingly, the teams level at 68/1 after the six power play overs and again at 128 after 14 although the Proteas had lost three wickets at that stage to England’s two.