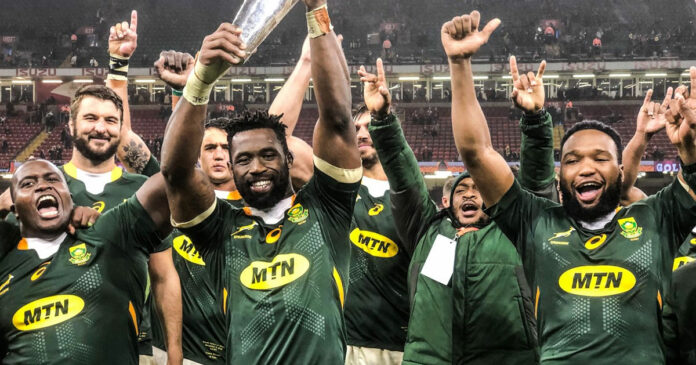 Springbok head coach Jacques Nienaber lauded the South African players for their stamina to outlast Wales for a 23-18 victory in the opening Test of the Castle Lager Outgoing Tour in Cardiff on Saturday, which ended the team’s eight-year winning drought in Wales.

The Springboks broke the dam wall in the second half in pouring rain at the Principality Stadium after keeping the scoreboard ticking with penalty goals in the first half, after which Wales led by 12-9, to finish the match with one try compliments of Malcolm Marx (hooker), with both teams slotting six penalty goals.

Nienaber and Springbok captain and flank Siya Kolisi said although there were a number of things they needed to work on after struggling to capitalise on a few try-scoring opportunities in the trying conditions, the victory was fantastic for the team’s mind-set with an eye on the 2023 Rugby World Cup in France.

“We knew it was going to be a tough game, and there was some over-eagerness as we lacked accuracy at times in terms of using our opportunities,” said Nienaber.

“But this was a valuable win for us because we knew these are the same conditions we can expect in the 2023 World Cup.”

Nienaber added: “I thought the maul try we scored late in the game was the moment that the game really changed. It was big for us, and we probably won the game right there, so I have to take my hat off to the forwards for making it happen.”

Kolisi praised the replacements for their huge contribution in closing out the game and said: “The players who came off the bench were huge today, and we know that our replacements are always one of our weapons – they were very special today.

“Frans (Steyn) made an impact after he came on early for Damian Willemse, and the same can be said for all the forwards, as well as Cobus (Reinach) and Elton (Jantjies) when they came on.”

Nienaber also praised the starting pack for stamping their authority early on and said: “It’s also important to never forget the ‘slow poison’ the starting players put into their opposition’s legs earlier in the game.

“We may not have gotten the reward from our drives in the first half, but I think the pack laid a great foundation, which opened up the opportunity for the guys that came on. They still had to use that and kick on, and I thought they did that very well today.”

Commenting on the injury status in the team immediately after the match Nienaber he would have a clearer picture within the next two days once the medical staff complete their assessments: “I spoke to our team doctor after the match and it seems that there aren’t any worries around Trevor Nyakane (prop) injury wise, but we will probably know more in the next 48 hours later.”

The Springboks will travel to Edinburgh on Sunday and will begin their on-field preparations for their second Test against Scotland on Monday.