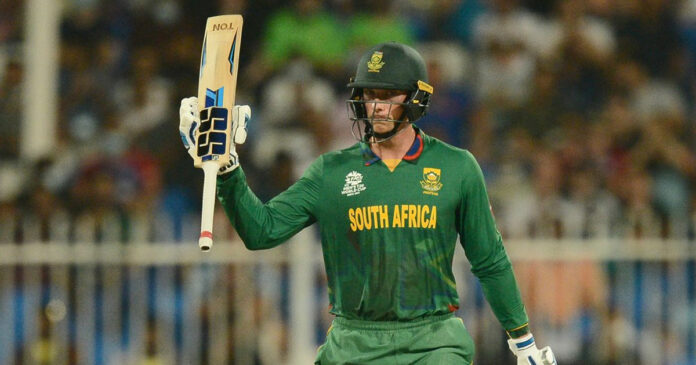 A magnificent knock from Rassie van der Dussen and a hat-trick by Kagiso Rabada were the highlights of a valiant 10-run victory for South Africa against England in their final Super-12 encounter on Saturday at the Sharjah Cricket Stadium, as the Proteas bowed out of the ICC Men’s T20 World Cup on net run rate.

Temba Bavuma’s team ended Group 1 in third place on eight points, tied with Australia and separated by a net run rate of 0.477, with the Australians and first-place England going through to the semi-finals.

After losing the toss and being asked to bat first, the batters in green and gold fought through a challenging opening period, only losing the wicket of Reeza Hendricks (2), before Quinton de Kock (34) and van der Dussen added 71 runs for the second wicket.

Although de Kock was eventually caught in the deep off the bowling of Adil Rashid (1-32), the experienced van der Dussen found a more than capable partner in Aiden Markram as the pair showed an incredible mixture of poise and aggression at the crease to pile on the runs.

The duo combined for a game-changing partnership of 103 runs, with van der Dussen smashing 94* off 60 balls, including five fours and six sixes, while Markram continued his impressive form in the tournament, recording his second fifty (52* off 25 balls; 2 fours, 4 sixes).

With a commanding total of 189 / 2 on the scoreboard, South Africa had to restrict England to 130 or less to advance through to the semi-finals.

Eoin Morgan’s side began their chase on positive footing, advancing to 38 for no loss before opener, Jason Roy was forced to retire hurt. Despite the constant pressure from the Proteas bowlers, the English batters managed starts at the crease with Moeen Ali (37) and Dawid Malan (33) top-scoring.

After England surpassed the 130-run mark in the 16th over, the challenge for the Proteas shifted to ending the competition on a positive note and Rabada took that battle on personally.

The fast bowler picked up the third hat-trick of the 2021 T20 World Cup in the final over of the game, removing Chris Woakes (7), Morgan (17) and Chris Joran (0) to wrap up the result for South Africa and finish with figures of 3 – 48.

South Africa end the tournament with four victories out of five, as they begin their journey back home with their heads held high.