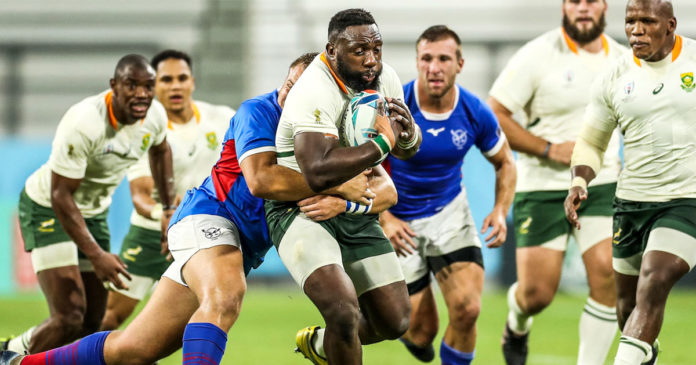 The inclusion of the three tight forwards are the only changes to the starting XV that did duty in the opening Pool B meeting with New Zealand.

Mtawarira, Mbonambi and De Jager leapfrog Steven Kitshoff, Malcolm Marx and Franco Mostert respectively, who are all expected to make an impact from the bench after the interval.

Two players drop out from the New Zealand match 23 completely with Trevor Nyakane (who has returned home with a calf injury) and Jesse Kriel (hamstring) not considered because of injury.

Nyakane is replaced by Vincent Koch, while there is not a direct replacement for Kriel. Rassie Erasmus, director of rugby, has opted for only two back replacements on the bench and six forwards. De Jager, who carried the water against New Zealand, is the other new name to the line-up along with Koch.

“Italy have a very good pack and put a lot of effort in their set phases,” said Erasmus. “People may think it is a gamble to have only two back replacements but we want to have plenty of ammunition for what is likely to be a major forward battle.

“It’s a 23-player game these days and the players who come on will be expected to contribute almost as much in game time as those who start among the front rowers.

“But for this game we are asking the players we have chosen to start to set the tone.”

The Springboks must win to have any hopes of qualifying for the quarter-finals.

The teams have met 14 times before, with South Africa winning 13, although that solitary defeat (in Florence in 2016) was with a team featuring 10 of Friday’s Bok selection (in what turned out to be Bryan Habana’s final Springbok test).

“Italy have had their eyes on this match for a couple of years and will have planned and schemed how to bring us down once again,” said Erasmus.

“This is a defining match for them and while we were focusing on the New Zealand game, they will have had their eyes on this one as the key to the quarter-finals for them.

“That means we have to be at our absolute best if we are to beat them – we are at the stage already where there are no second chances. That’s a message we have been emphasising to the players this week.”

Erasmus’s decision to have only two backs on the bench was an option he believed the team had the resources to manage.

“We have versatile players in the backs who can cover a number of positions and we have planned for different scenarios,” he said.

“This game is going to be decided by the forwards and at the set phases and we wanted to maximise our options in those battles.”

The match kicks off at 11h45 SA time on Friday (18h45 Japanese time) and will be broadcast on SuperSport 201 and SABC radio channels.

The Springbok team to play Italy in Shizuoka on Friday:

Friday’s Test match between South Africa and Italy will be the fifteenth, but the first in a Rugby World Cup Tournament.

The first Test match between Italy, also known as the Azzurri, and South Africa took place on the two-match year-end tour in 1995. Francois Pienaar’s World Champions won that Test 40-21. It would be 21 years and 12 Test matches later before Italy won their first and only Test match against South Africa. That Test match took place in Florence on 19 November, 2016 and was narrowly won by two points, the score 18-20.

The Test on Friday will feature ten Springbok players who were involved in that first and only loss in Florence.

The complete record between South Africa and Italy is as follows:

Notable team records for South Africa against Italy are:

Individual match records against Italy are: