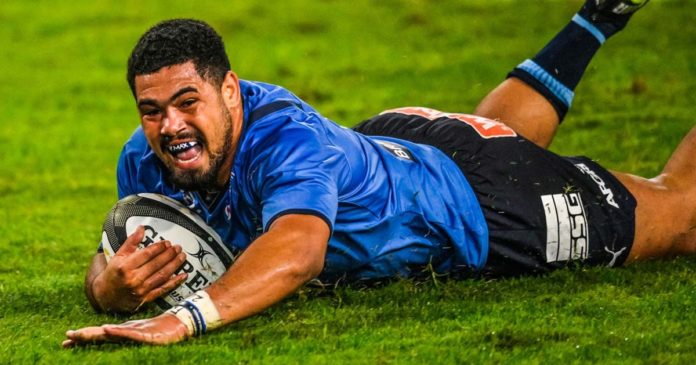 The Vodacom Bulls claimed top spot in the PRO14 Rainbow Cup SA in Durban on Saturday evening when they defeated the Cell C Sharks by 34-22 in the final match, and in the process booked their place in next weekend’s ‘North v South’ final in Italy.

The men from Pretoria travelled to Jonsson Kings Park with a four point advantage on the log, while the KwaZulu-Natalians still had an outside chance to top the standings and progress to the Rainbow Cup final against Benetton in Treviso.

However, for that to happen, the Cell C Sharks had to win with a try-scoring bonus-point while at the same time ensuring the Vodacom Bulls return to Pretoria empty-handed, which was always going to be a very tough ask.

The Vodacom Bulls enjoyed a stronger start to the game and held a 13-10 lead at the break, with both sides managing to score one try apiece, with the visitors edging the host thanks to Morné Steyn’s two successful penalty goals.

However, the Vodacom Bulls were rampant after the break and sealed their four-try bonus point before the hour-mark, when they outscored the home side by three tries to one to open up a 34-15 gap.

Although the Cell C Sharks managed to score again, the men in light blue had done enough to book their tickets to the Rainbow Cup final.

Vodacom Bulls No 8 Marcell Coetzee, who deputised for injured Springbok Duane Vermeulen, was a key figure for his side and admitted it was a tough arm wrestle in the first half.

“It was a tough opening half and we conceded too much possession while they did well at the set pieces,” said Coetzee.

“During the halftime break we said we wanted to go back to our DNA, which is to dominate upfront, and I am glad we managed to do that in the second half.

“Finals rugby is all about small margins and we managed to keep the errors to a minimum. I am extremely proud of the boys, we all did our part and I am glad we are through to the final.”

Cell C Sharks skipper Lukhanyo Am, who had a big hand in a brilliant try scored by Springbok captain Siya Kolisi, lamented their wasted opportunities.

“We created chances, but we couldn’t make use of our opportunities,” explained Am.

“We all realised that we let ourselves down. This is a great group of players and I want to wish them well for the forthcoming Carling Currie Cup campaign,” mentioned Am, one of several players who will join the Springbok camp on Sunday in Bloemfontein.

After six rounds, the Vodacom Bulls topped the log on 25 points, followed by the DHL Stormers (17), Cell C Sharks (16) and Emirates Lions (8).