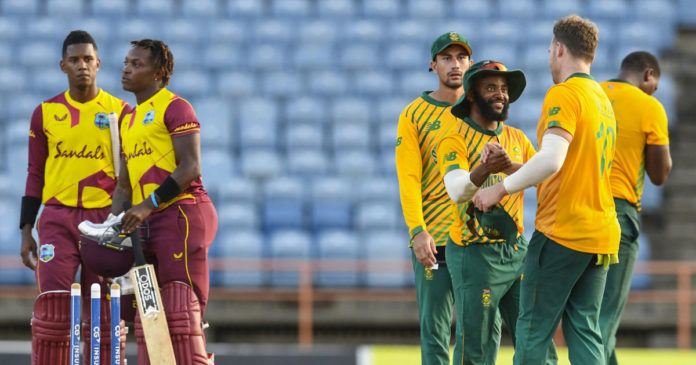 Victory by 25 runs gave the Proteas a 3-2 T20 international series triumph over the current ICC T20 World Cup Champions, West Indies, when they met for the series decider at the National Cricket Stadium on Saturday.

A match-winning, 128-run, second-wicket stand between Quinton de Kock and Aiden Markram set up the visitors’ road to their final score of 168/4 at the end of their allotted overs. De Kock made a 42-ball 60 while Markram returned a career-best score of 70 off 48 (3x4s, 4x6s).

David Miller and Wiaan Mulder then returned unbeaten for 18 and nine respectively.

With the ball, Tabraiz Shamsi did not disappoint in keeping the West Indian batsmen quiet, but it was the inclusion of Mulder (2/31) into the attack that provided the game changing moment of the day. He took the consecutive wickets of captain Kieron Pollard (13) and Andre Russell (0) to halt the Windies’ chase, while Kagiso Rabada (2/24) and Lungi Ngidi (3/32) polished off the tail at the death after beginning with good strides up front.