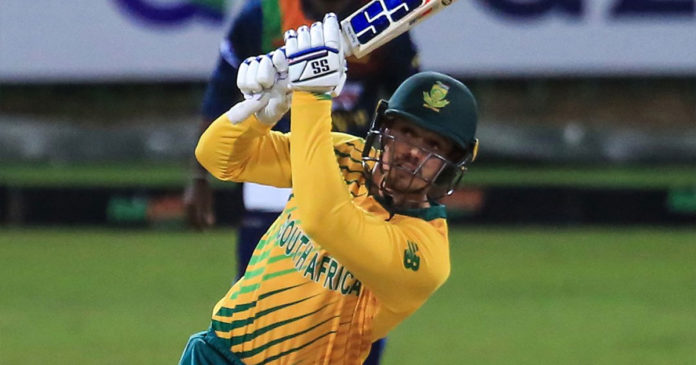 The Proteas beat Sri Lanka by 28 runs to go 1-0 up in the three-match T20 international series at the R. Premadasa International Cricket Stadium on Friday. It is the ICC T20 World Cup squad’s first outing since their announcement by Cricket South Africa (CSA).

The opening pair shared a 73-run stand off 59 deliveries before their partnership was terminated by the departure of De Kock at the end of the 10th over. Hendricks did not stick around for much longer after Markram’s arrival and was quickly joined in the hut by Heinrich Klaasen for just two.

It was David Miller (26 off 15, 2x4s, 1×6) who assisted in the revival of the innings by putting on a 65-run partnership for the fourth wicket with Markram to get South Africa to a score that was above par taking the slowness of the pitch into account.

The pick of the Sri Lankan bowling attack was Wanindu Hasaranga de Silva with 2/23 in his four-over spell. The rest of the bowlers did not get the same success as the South Africans were more than ready for the spinner-friendly conditions.

The home team’s reply did not go as they would have hoped. They were restricted to 135/6 in their 20 overs, with the only shining light coming from Dinesh Chandimal’s career-best 66 not out.

All of the visitors’ bowlers returned one wicket each with the exception of Kagiso Rabada, but an overall team effort by the unit yielded the desired results.

South Africa will be anxious to correct the five dropped catches that took place in the match and ensure that that discipline of the game is addressed before the second fixture on Sunday.