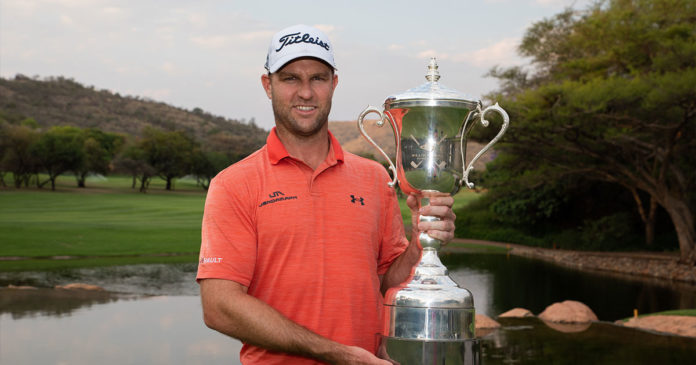 Lyle Rowe knew that if he kept knocking on doors one would eventually open again and Saturday was the day when his first Sunshine Tour title in five years finally arrived as he won the Blue Label Challenge at the Gary Player Country Club.

Rowe, one point off the lead going into the final round, shot a three-under-par 69 on Saturday for nine points, taking his overall tally over the four days to 33 points in the event that uses a modified Stableford scoring system.

That was four points clear – the equivalent of two birdies – of second-placed Dylan Mostert and was enough to give Rowe his third Sunshine Tour title and his first since winning the Zimbabwe Open in April 2016.

“I’ve been playing well for a while now and I just knew I needed to keep doing what I’ve been doing,” Rowe said. “It’s just a couple of shots every tournament and even though I didn’t make it easy for myself, I kept giving myself chances. I’ve gone back to the short putter, which gives me more feel, so I’ve been putting well and I’ve just been doing the right things mentally, controlling what I can on the course.”

It was also the Humewood golfer’s first win on South African soil as his other triumph came in the Zambia Open in June 2014.

“I was runner-up twice in this event in Swaziland, so I probably should have won there too! But to win on as great a golf course as this and in South Africa is special. I enjoy the format, I am quite aggressive and it shows I guess in that I get more birdies and bogeys, but a dropped shot is only minus a point while a birdie gets you two points,” Rowe said.

Where the 34-year-old Rowe really shut out the opposition was around the turn, where he played superbly to collect four successive birdies.

Despite bogeys on the 16th and 17th holes, Rowe failing to get out of a greenside bunker on his first attempt but hitting the next shot to three feet, Mostert was four points behind as they teed it up on the final hole.

But the left-hander sent his drive into the right rough and was unable to go direct for the green with his second. Rowe hit the perfect drive, laid up and then two-putted for a rock-solid par.

“I got nice momentum and confidence around the turn, which meant I went into the back nine feeling positive and I trusted myself down the stretch. I tried to get a bit too cute with that first bunker shot,” Rowe said.

Another left-hander, Ruan Korb, who was the second-round leader, fired the best round of the day, his 67 earning him 14 points and lifting him into a share of third with Jaco Ahlers on 27 points. Korb collected two eagles on the back nine, including one on the par-four 15th when he drove the green.

Ockie Strydom was alone in fifth with 26 points.