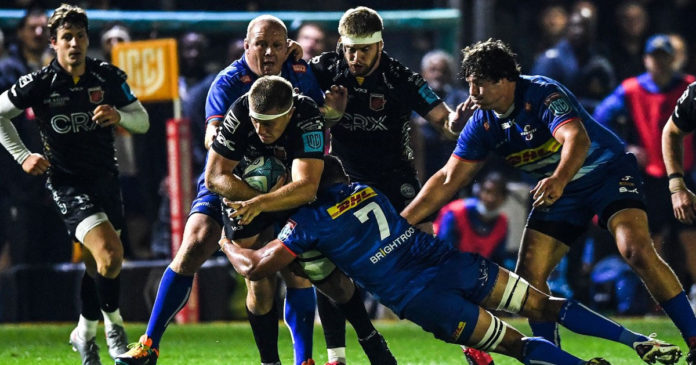 The tough nature of the Vodacom United Rugby Championship was again underlined on the weekend where only the DHL Stormers managed a victory for the four South African franchises taking on the best of Ireland, Italy, Scotland and Wales.

It was another weekend of frustration for the South African franchises as they had to deal with law interpretations and tough conditions, with narrow defeats by the Cell C Sharks and Vodacom Bulls meaning the local teams will return to the Republic with four wins and one draw from their first 16 matches in the new competition.

Each of the Vodacom Bulls, Emirates Lions, Cell C Sharks and DHL Stormers got one win on tour, while the Capetonians also had a draw, which sees them lead the South African Shield after four rounds with seven points.

With the competition continuing next weekend in the north, the SA sides will have a break until round six, when they will continue their challenge at home against four visiting clubs.

Two tries by Leolin Zas steered the DHL Stormers to their first victory in the Vodacom United Rugby Championship as they defeated the Dragons 24-10 at Rodney Parade in Newport, Wales on Friday night.

The DHL Stormers trailed 10-9 after a frustrating first half in which handling errors denied them from threatening to score a try, and this saw them rely on flyhalf Manie Libbok’s boot for all their points.

The tables turned for the Capetonians in the second half as they showed more composure on attack and applied pressure in the scrums and through their effective defence, and the rewards followed with Libbok slotting over his fourth penalty goal, while Zas crossed the tryline twice to hand them the victory.

Ulster flanker Nick Timoney scored two tries as the Northern Irishmen kept up their perfect with a 26-10 bonus-point win over Emirates Lions to jump to the top of the Vodacom United Rugby Championship table.

The men from Johannesburg were still in it at the break, when Ulster led by 12-10, but the hosts pulled away in the second half and scored 14 second-half points to secure the bonus point win.

The Vodacom Bulls subsided to a 17-10 (halftime 14-3) defeat to Edinburgh in the Vodacom Untied Rugby Championship on Saturday as they were unable to recapture the authority of their previous round win over Cardiff.

They again managed to win the second half (7-3) in torrential rain in the Scottish capital but had left it too late after an indifferent first half in which they were unable to dominate the collisions.

It might have been different but for a critical TMO referral in the 76th minute. Bulls left wing Madosh Tambwe levered himself forward and reached out to slam the ball down on the line for what would have been an equalizing score – if replacement flyhalf Morne Steyn had kicked the touchline conversion.

However, after an extended review Tambwe was ruled to have made a double movement and for all the Bulls’ late urgency, they could not find their way back into the home side’s 22.

Brave Cell C Sharks run out of time in Cardiff

Cardiff got some form of revenge after their defeat last weekend when they beat the Cell C Sharks by 23-17 (half-time 17-10) in a tense Vodacom United Rugby Championship clash at Cardiff Arms Park on Saturday night.

Down 0-17 after 27 minutes, the Sharks were with their backs against the wall for most of the match and although they kept on pressing hard, they ran out of time in the end and had to be content with leaving the Welsh capital with a solitary losing bonus point.

Both of Cardiff’s tries, by Matthew Morgan and Willis Halaholo, were soft five-pointers and basically down to defensive mistakes by the KwaZulu-Natalians. In fact, the Sharks were left ruing a less than satisfactory defensive display, succeeding with only 88% of their tackles, while the hosts made 96% of theirs.