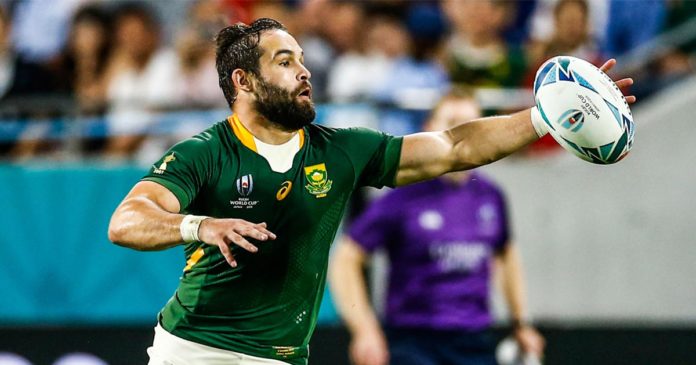 Cobus Reinach’s hat-trick try against Canada at the Rugby World Cup has been nominated as one of the contenders for the International Rugby Players (IRP) Try of the Year 2019 award.

The winner will be announced at the World Rugby Awards in Tokyo on Sunday, 3 November.

The sweeping, length of the field score, featuring four Springboks, is one of four shortlisted tries – three of them scored at the Rugby World Cup in Japan.

The four tries were selected by the IRP Try of the Year panel of former players in Rugby World Cup winners Fiao’o Faamausili and Bryan Habana along with Jamie Heaslip and Thierry Dusautoir.

Reinach’s try came in the 66-7 demolition of Canada. It was started by Elton Jantjies inside the Springbok 22. The flyhalf produced an inch-perfect kick-pass for winger Warrick Gelant, who evaded DTH van der Merwe, and sprinted into the Canadian half.

Damian de Allende offered support to keep the move going and in turn spun a pass to Reinach, who breezed under the posts to complete his hat-trick with barely 20 minutes of this RWC 2019 Pool B match played.

Also nominated are tries by Charles Ollivon for France against Wales in the quarter-final; Sergio Parisse for Italy in a warm-up match against Russia, and TJ Perenara for New Zealand against Namibia.

International Rugby Players’ representative Conrad Smith, the former All Black and Rugby World Cup winner who chaired the Try of the Year panel, said: “There were some excellent scores this year and our job to pick a shortlist was a difficult one.

“From the men’s and women’s Six Nations in early 2019 all the way through to the Rugby World Cup in Japan, we saw some amazing efforts during the year.

“These tries really are a testament to the quality of international rugby and the skills on display out there and this sparked some great debate among the panel.”