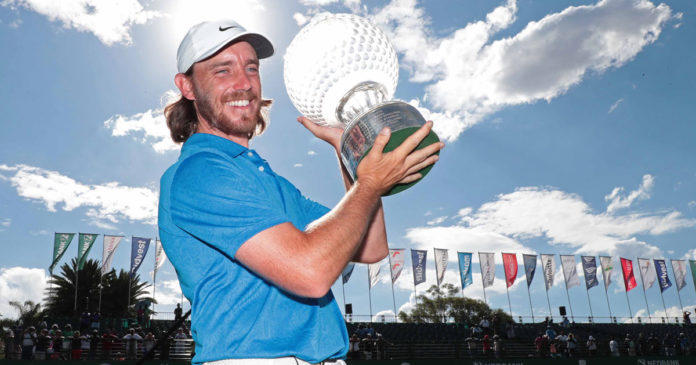 Tommy Fleetwood waited 22 months for a win, and when it came it was big.

The Englishman won the richest first-place cheque on the European Tour this week of US$2.5 million with his playoff victory in the Nedbank Golf Challenge hosted by Gary Player at the Gary Player Country Club on Sunday.

He did so with a final round of 65 including three eagles, and then beat Sweden’s Marcus Kinhult on the first extra hole of a playoff after both finished tied for the lead on 12 under par.

“Obviously I guess being a golfer these days, you have a chance at a young age to set your family up for life,” he said of the prize money. But the victory was worth a whole lot more to him.

“I’m just very proud of that, really, and everybody that goes on the journey with you constantly. It’s just really, really cool when you win a tournament. It really is.”

Fleetwood started the final round six shots back of the leader, South Africa’s Zander Lombard. Louis Oosthuizen was also in the hunt at only one shot off the lead at the start of the final round.

But as both the South Africans faltered – with Oosthuizen finishing tied sixth and Lombard tied eighth – that opened the door for Fleetwood and Kinhult.

Fleetwood’s three eagles at holes nine, 10 and 14 took him through the field. And it was his third eagle on the par-five 14th that was indeed the #StrokeofGenius this tournament recognizes as he hit a three wood into the narrow green and to within 10 feet of the hole.

Kinhult pushed his way to the fore with a 68 that started with three straight birdies. And with Fleetwood in the clubhouse on 12 under, the Swede held his nerve and holed a par putt on 18 to force the playoff.

But playing the 18th again, it was Fleetwood’s par to Kinhult’s bogey that decided the 2019 Nedbank Golf Challenge.

“You stand over those putts, you never know what’s going to happen. You just have to stand up and hit them,” Fleetwood said of his winning putt.

It was Fleetwood’s second victory on the Rolex Series, and one that lifted him into second place on the Race to Dubai rankings going into the season finale, the DP World Tour Championship next week and where he’ll attempt to be crowned the European Tour’s number one for the second time in his career.

“It’s an absolute privilege to get to the last event with a chance of winning The Race to Dubai. It’s an amazing thing to have in your career and it’s one of the things I’m most proud of.”