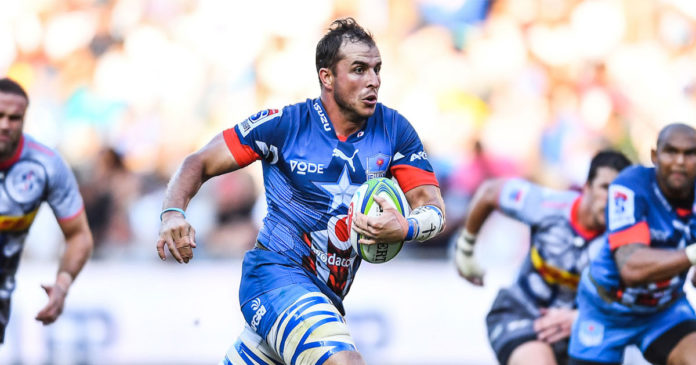 The two Gauteng sides are both on the road in Australasia this weekend, and from a South African perspective the big coastal Vodacom Super Rugby derby between the Cell C Sharks and DHL Stormers in Durban will provide plenty of excitement.

The Emirates Lions are the first SA team in action when they start the New Zealand leg of their tour with a clash against the high-flying Blues in Auckland, where kick-off is scheduled for 05h25 on Saturday morning (SA time).

That match is followed by the Vodacom Bulls’ first Australasian tour match – a tough assignment against the Reds in Brisbane. Kick-off at Suncorp Stadium is at 10h15.

The big local derby at Jonsson Kings Park, where the two top-performing South African teams will battle it out, kicks off at 15h05. All matches will be broadcast live on SuperSport.

Odendaal back to captain Vodacom Bulls in Brisbane

Burger Odendaal is back from injury and will lead the Vodacom Bulls in their Vodacom Super Rugby Australasian tour opener against the Reds in Brisbane on Saturday.

Odendaal’s inclusion at inside centre is the only personnel change to the Vodacom Bulls’ team from last weekend’s win over the Highlanders. As a result, Johnny Kotze moves back to outside centre.

Each of the last 13 Vodacom Super Rugby meetings between the Reds and the Vodacom Bulls have been won by the home team on the day – indeed, the Queenslanders have won their last six home games on the bounce against the men from Pretoria, with four of those wins coming by seven points or fewer.

Emirates Lions coach Ivan van Rooyen has made a host of changes to his team for their Vodacom Super Rugby tour match in Auckland on Saturday, when the men from Johannesburg will be hoping to repeat the result from their away match against the Blues.

Frans van Wyk, Hacjivah Dayimani and Ruan Vermaak will get their first starts on tour, while Willem Alberts will move to lock, with Vermaak, Dayimani and Marnus Schoeman forming the new loose-trio.

At the back, Manuel Rass returns to action while Jamba Ulengo has recovered sufficiently from a quad contusion to be included in the starting line-up. Tyrone Green moves to fullback.

Three of the last four Vodacom Super Rugby games between the Blues and the Emirates Lions have been decided by a margin of exactly three points on the day, with the men from Johannesburg winning three of those – including a 13-10 win when they last faced the Aucklanders in New Zealand in 2015 (in Albany) – and losing one.

The Cell C Sharks will field an unchanged side in their Vodacom Super Rugby showdown with the DHL Stormers at Jonsson Kings Park on Saturday, as they aim to consolidate their position at the top of the overall standings.

Sean Everitt rotated his squad on tour to keep the players fresh given the demands on the KwaZulu-Natalians before their first bye, and as such he has opted to keep a winning formula as far as team selection goes by naming the same match-23.

John Dobson, DHL Stormers head coach, followed another script though as he made several changes to his team for their trip to Durban, where the Cell C Sharks are also on a good run – they have won three of their last four games at home (L1).

The other Round 7 fixtures are (SA times):