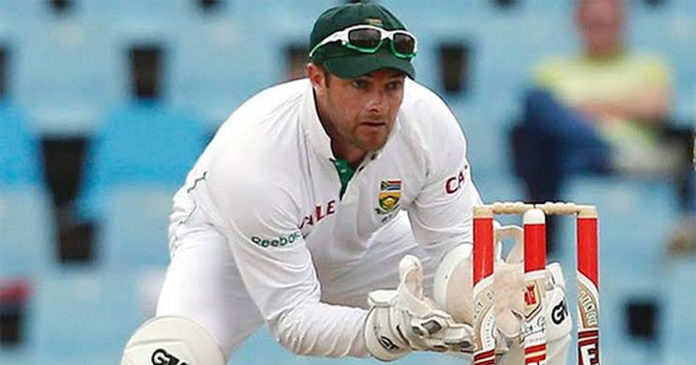 Cricket South Africa (CSA) today announced the appointment of Mark Boucher as head coach of the Standard Bank Proteas and Enoch Nkwe as assistant coach at a well-attended Media Briefing at Newlands.

It was Acting Director of Cricket Graeme Smith’s first opportunity to engage with the media and he also outlined the timeline for the next week as the Proteas begin their preparation for the Test series against England starting on Boxing Day at SuperSport Park.

In other appointments Linda Zondi resumes the position of convener of the National Selection Panel (NSP), Faf du Plessis was confirmed as Proteas Test match captain and Ashwell Prince will take charge of the South Africa A side for their upcoming tour match against England.

“I have brought Boucher on board because I feel he will bring the toughness to turn a young and inexperienced Proteas squad into a battle-ready outfit. With his experience of a long career as an international cricketer he has first hand experience of what it takes to succeed in the Test arena,” commented Smith.

“I have the highest regard for Enoch as well and I want to create a clear path for him to grow into a top international coach.

“At the same time there is a clear need to maintain continuity and stability in the Proteas management team and we will be retaining the technical support staff along with Volvo Masubelele continuing as team manager and Justin Ontong as fielding coach.

“I will be appointing batting and bowling consultants, and these will be announced in the next couple of days,” added Smith.

Boucher and Nkwe both attended the Media Briefing but Du Plessis was given leave of absence. “It is only fair that Faf focuses his attention on the MSL Final on Monday so the Media will have their opportunity to engage with him after Monday evening’s Final,” explained Smith.

He also outlined the Proteas plans for the next week as the build-up to the international season begins.

“We will be announcing both the Proteas Test squad and the South Africa A squad to play England on Monday. The Test squad will then go into immediate camp to prepare for the Test series and some of them will be included in the South Africa A team. Aiden Markram is likely to be the only player released for franchise duty in the 4-day series as he is in need of match practice after his lengthy injury-enforced absence.

“As far as my vision for the future is concerned, we need to rewind to performance excellence and that will be the focus going forward. Our public want and demand a world-class Proteas side and we must deliver on that.

“As far as my own future is concerned, I face a very busy and at times hectic three months and I am not going to look further ahead than that. I am sure everybody will understand that.

“Because of the time frame the Proteas Test squad is my most immediate concern and we will be rolling out plans for the Proteas Women and the under-19s, who both face important ICC global events next year, in the immediate future,” concluded Smith.