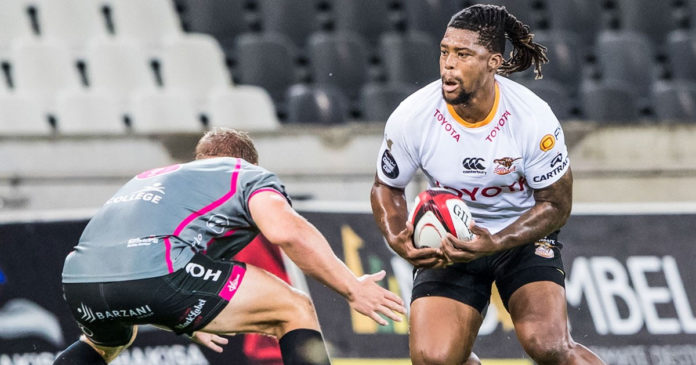 The Xerox Lions jumped two spots into second position on the Carling Currie Cup log with a great victory over the Cell C Sharks, while the Toyota Cheetahs kept alive their semi-final aspirations with a hard-fought fourth round win over the Phakisa Pumas.

The Vodacom Bulls’ match with Tafel Lager Griquas was cancelled, with both teams earning two log points, but the movement at the top of the standings means the next couple of rounds of action will be massively important as the teams jostle for home ground advantage in the playoffs.

The Xerox Lions will be smiling after they broke a three-year Carling Currie Cup win drought against the Cell C Sharks in Johannesburg on Saturday night, keeping the visitors try-less in the process.

On Friday night in Nelspruit, the Phakisa Pumas came close to a vital win, but in the end more accurate goal-kicking by the experienced two-time Springbok Rugby World Cup-winner Frans Steyn saw the Toyota Cheetahs home.

With three rounds to go before the semi-finals, the Vodacom Bulls still top the table with 35 points, but after this weekend, the Xerox Lions are now second on 29, followed by the Cell C Sharks (28), DHL Western Province (26) and the Toyota Cheetahs (21) – with the latter three teams having a game in hand over the Gautengers – with the Phakisa Pumas (12) and Tafel Lager Griquas (7) propping up the table.

Four second half tries by the visiting Toyota Cheetahs eased them past the Phakisa Pumas in Nelspruit, with the team from Bloemfontein scoring a well-deserved, but hard-fought 35-31 win at the Mbombela Stadium in their fourth round Carling Currie Cup clash on Friday.

The home side had a strong first half and scored two tries to one to lead 12-7 at the break on a wet night in the Lowveld, but four tries, mainly through the forwards, saw the Bloem side home.

Their cause was greatly aided by Frans Steyn’s accurate boot, with the experienced flyhalf converting all five tries, while the Phakisa Pumas would lament the 10 points that went missing from Devon Williams’ kicking tee.

Both sides scored five tries in the end, with the better accuracy from their goal kicker giving the Toyota Cheetahs the edge on the score board.

The Xerox Lions used their opportunities and tackled the Cell C Sharks to shreds as they shot up to second spot on the Carling Currie Cup log courtesy of a 27-12 victory in Johannesburg on Saturday night.

It was a proper arm-wrestle at times, but the home team looked just that bit more composed and focused than the KwaZulu-Natalians as they secured a valuable victory at Emirates Airline Park, where Courtnall Skosan (wing) and Tiaan Swanepoel (fullback) scored the only tries of the match for the Xerox Lions.

Territory and possession are quite important, and it was here where the Xerox Lions laid the foundation for the win, coupled with great defence – and with big Willem Alberts (lock) leading the charge the Cell C Sharks failed to cross the home team’s try-line – on the back of a dominant performance in the scrum.