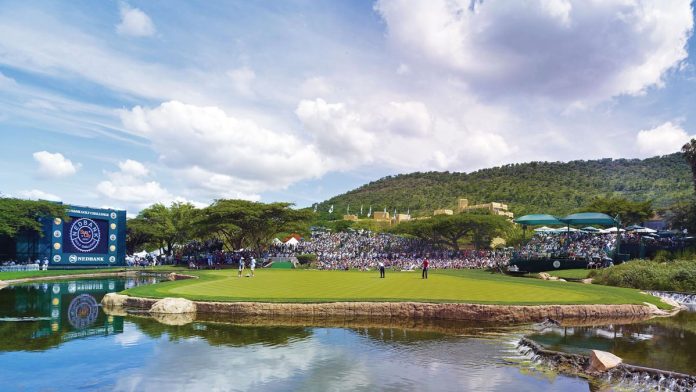 The Nedbank Golf Challenge hosted by Gary Player today announced a number of changes for 2019, including a first prize of US$2.5 million, as part of a series of exciting changes to the final three Rolex Series events of the European Tour season.

The tournament, which takes place at Sun City from November 14-17, will once again be the penultimate event on the European Tour’s Race to Dubai, joining the Turkish Airlines Open (November 7-10) and the DP World Tour Championship, Dubai (November 14-17) at the conclusion of the 2019 season.

Significant changes to all three Rolex Series events were announced to increase the excitement around this season finale, with the winner of the 2019 Nedbank Golf Challenge now set to receive a winner’s cheque for US$2.5 million – double the US$1.25 million banked by England’s Lee Westwood in 2018.

The tournament’s overall prize fund will remain at US$7.5 million, with the remainder of the field playing for the remaining US$5million. The Race to Dubai points on offer have increased to 10,000, up from 7,500 in 2018.

The field in this year’s tournament will comprise the leading 60 players available from the Race to Dubai, all of whom will be aiming to seal a place in the top 50 on the Race to Dubai which ensures qualification for the season-ending DP World Tour Championship, Dubai the following week.

A further four places will be then be added to the final Nedbank field, made up of three invitations and the winner of the Sunshine Tour Order of Merit.

First played in 1981, the Nedbank Golf Challenge became part of the European Tour International Schedule at the beginning of the 2014 season and joined the prestigious Rolex Series, the eight premium tournaments on the Race to Dubai, in 2017. The changes announced today, combined with Nedbank’s recent three-year extension as title sponsor, mark another new chapter for the tournament further enhance its reputation as one of Africa’s leading sporting events.Last year, more than 72 000 fans watched Westwood seal his 24th European Tour win and first Rolex Series title, as he joined Thomas Bjørn (2014), Danny Willett (2015), Alex Noren (2016) and Branden Grace (2017) in an impressive list of recent champions, and the changes are aimed at attracting another world class field in November.

Mike Brown, Chief Executive, Nedbank Group, said: “We are thrilled to extend our partnership with the European Tour and Sun International for another three years until 2021. The Nedbank Golf Challenge hosted by Gary Player, ‘Africa’s Major’, is an iconic event and one of the best corporate hospitality and live experiences on the African continent. It is a great platform for South Africa to showcase our beautiful country to the rest of the world and for Nedbank to demonstrate our brand essence of using our financial expertise to do good for individuals, families, businesses and society.”

Anthony Leeming, Chief Executive, Sun International, said: “We’re absolutely delighted with the changes made by the European Tour and the continuation of our longstanding partnership with Nedbank and the European Tour. These relationships are key to the continued growth of ‘Africa’s Major’ and its status as one of the premier tournaments on the Tour. We look forward to once again hosting the sponsors, fans and players at our amazing resort Sun City in its 40th year since opening.”

Gary Player, nine time Major winner and tournament host at the Gary Player Country Club in Sun City, said: “The evolution of the Nedbank Golf Challenge since we first started the Million Dollar Challenge decades ago has been simply spectacular to witness.

“I am delighted to host an event that will continue to put South Africa on the map, not only as a superb golfing country, but for our overall tourism too. This obviously would not be possible without the support of the European Tour, Nedbank, Sun International, Rolex and all our sponsors. On behalf of all our fans we express our sincere gratitude.”

The changes to the Nedbank Golf Challenge hosted by Gary Player are part of wider changes to the final three Rolex Series events on the European Tour’s Race to Dubai. This includes the largest first prize in the history of golf going to the winner of the season-ending DP World Tour Championship, Dubai, with the champion at Jumeirah Golf Estates now pocketing US$3 million, up significantly from the US$1.33 million won by Danny Willett last November.

In addition, the field sizes for both events, along with the Nedbank Golf Challenge, have been revised and reduced to show a clear progression from event to event; with the leading 70 players from the Race to Dubai playing in Turkey, the leading 60 competing in South Africa, and the leading 50 lining up in Dubai.

The final change is in relation to the Bonus Pool which is distributed at the end of the season. It will now be divided amongst the top five players in the Race to Dubai instead of the top ten with the 2019 winner claiming US$2 million, up from the US$1.25 million claimed by Francesco Molinari last year.

Keith Pelley, Chief Executive of the European Tour, said: “The changes we have announced in terms of enhanced winner’s cheques, Race to Dubai points and Bonus Pool dividend are designed to increase the excitement around the end of the season for our fans, as well as encourage greater top player participation in our final three events.

“We have undertaken significant analysis recently and have found that, had these additional Race to Dubai points been available over the past five years; on average between five and 16 players would have come to our final event with a chance of winning the Race to Dubai, in addition to an average of 43 players having the chance to earn Bonus Pool money at the end of the season; both numbers considerably higher than was actually the case in those years.

“With the revised prize money breakdown and the extra Race to Dubai points in place for 2019, this provides a tremendous incentive for our players.”

Summary of the Changes