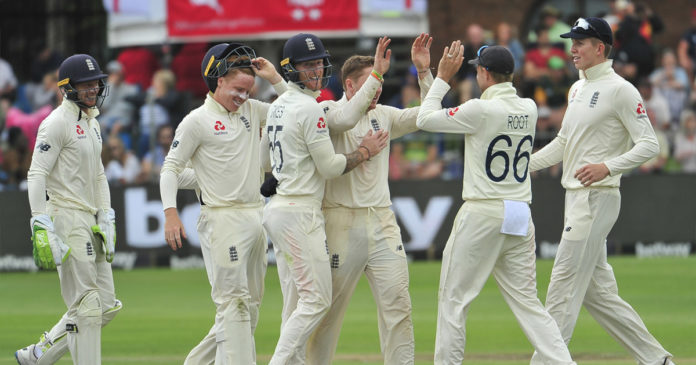 England set the tone for the rest of the day when they needed just 28 balls to take the last four South African wickets for a single run and put themselves in a position to enforce the follow on on day four of the third Test match at St. George’s Park, Port Elizabeth, on Sunday.

And it did not get any better for the Standard Bank Proteas as they finished the day losing 10 wickets for 103 runs in spite of further lengthy delays for bad weather.

They finished on 102/6. The 188 runs they need to make England bat again seems totally out of the question and they will need more help from the weather to get out of this one.

It was a day that asked a lot of questions of the Proteas and they did not come up with any convincing answers. The biggest problem seems to be the ongoing struggle they are having in playing spin bowling against an attack that is hardly the most threatening in this department. Dominic Bess is playing in only his fourth Test match and it was the part-time spin of England captain, Joe Root, that proved particularly troublesome. His return of 4/31 in 9 overs was a career best, having previously not taken more than 2 wickets in a Test innings.

The one bright performance was a semblance of form from Faf du Plessis who made the top score of 36 (123 balls, 6 fours and a six).

England are now poised to retain the Basil d’Oliveira Trophy, having regained it in South Africa in 2015 and retained it in England in 2017.

Unless the unexpected happens, the Proteas are probably only going to have a chance to square the series at the Imperial Wanderers Stadium later this week.