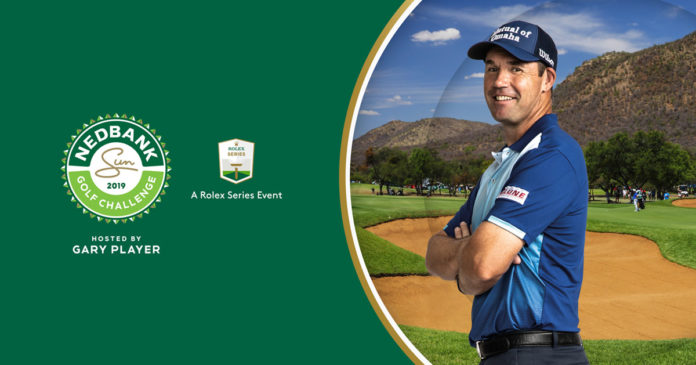 The 2020 European Ryder Cup Captain Padraig Harrington will tee it up in the Nedbank Golf Challenge hosted by Gary Player – the seventh Rolex Series event on the 2019 Race to Dubai – from November 14-17, 2019.

The three-time Major winner will make his fourth consecutive appearance at the event, as both Sun City and Gary Player Country Club celebrate their 40th anniversary.

The Irishman, whose 15 European Tour titles include the 2007 and 2008 Open Championships and the 2008 US PGA Championship, recorded one of the lowest rounds in the history of the Nedbank Golf Challenge when he shot 61 in the third round in 2001.

Harrington said: “I’m looking forward to returning to the Nedbank Golf Challenge this season – it’s always an enjoyable event with a great field and a challenging golf course. The event comes at a crucial point in the season, and it will be an interesting experience to be there both as a player and in my capacity as Ryder Cup Captain.

“I have some fond memories of competing at Sun City over the years and I’m delighted to be returning to help celebrate its 40th anniversary.”

Tournament host Gary Player said: “We can clearly see the commitment Nedbank, the European Tour, Rolex, Sun International and all our sponsors are putting into this tournament because the field is becoming more outstanding each week. I have always been a Padraig Harrington fan, and everyone at Sun City will be enthusiastic to have this Major Champion and gentleman back in South Africa.”

Mike Brown, Chief Executive, Nedbank Group, said: “We as tournament sponsors are thrilled to have Padraig Harrington, in his capacity as European Ryder Cup Captain, join the Nedbank Golf Challenge field this year. We are confident that his presence, together with the increased Race to Dubai points and prize money on offer for participants, will serve as a further incentive to attract European golf’s top talent to the tournament. We look forward to hosting them at Sun City in November.”

Anthony Leeming, Chief Executive of Sun International, said: “To have the current European Ryder Cup captain in our tournament is a spectacular addition to what is shaping up to be a really strong field this year. Padraig is a firm favourite with Sun City golf fans and has produced some wonderful golf on the Gary Player Country Club course in his previous Nedbank Golf Challenge appearances. We look forward to this tournament now also playing a role in the decisions he has to make in terms of formulating his Ryder Cup team.”

Westwood’s emotional three-stroke victory over Sergio Garcia in 2018 saw him capture his first Rolex Series title and become the first European golfer to win the Nedbank Golf Challenge three times, following his victories in 2010 and 2011.

The 2010 Open Champion Oosthuizen will be seeking to win the title for the first time after finishing third last year, four shots behind the European Ryder Cup legend.