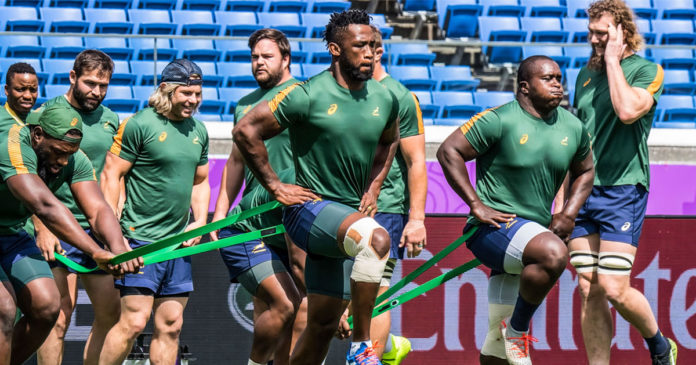 Siya Kolisi believes the rivalry between rugby’s greatest foes has been restored following two years of hard work by the Springbok team and management.

Kolisi was speaking on the eve of the Springboks’ opening Rugby World Cup Pool B match against New Zealand in Yokohama on Saturday.

The rugby world – northern and southern hemisphere – has widely tipped the match as a dress rehearsal for the 2 November final at the same venue. But Kolisi was staying very much in the present.

“The rivalry is the best it’s been in a while, so I’m looking forward to the game,” he said.

“We will give them the respect they deserve, but all that we can do and sort out is obviously ourselves. We are in a good place at the moment.

“They were quite dominant before the past two years, and then we had to fight back as a team to make sure that we got a little of the respect back.

“I wouldn’t know [if SA had a mental edge]; I’m not in the changing room. I wasn’t there physically in Wellington, but I could see how the guys were in the WhatsApp group.

“It has been close and we can’t say who will have an edge over whom as it’s been one point, two points, and then we played to a draw in the last one.

“That’s why this game is really important, to see where we are at as a group. You never know, after this, we might meet them again. So, it’s a really big game, and I wouldn’t say we have the edge or they have the edge – it’s 50-50 at the moment.”

Kolisi also said that tomorrow’s match would be a yardstick as to whether that balance had shifted: “We work really hard and the only way we could see whether we are improving or not is to test yourself against the best in the world.

“It gave us a lot of belief and hope to win that game two years ago (36-34 in Wellington), and since then, we haven’t looked back.

“We just believe we can get better and better. That’s what we strive for. They are tough opposition to test yourself against, but you can see where you are when you play against them.”

Kolisi said that the team had not been affected by nerves in the build-up to the match.

“We have been doing the training, and that keeps the nerves out – just being able to focus on our jobs. That is how I have been able to not think too much about the game,” he said.

“But since we got here now, walking around the Shibuya Crossing, you can feel the excitement and can see the people are very keen. It’s ‘vibing’ and the buzz is good.”

The image of departed Springbok legend Chester Williams will appear in every players’ number on the jersey and although Kolisi was too young to remember the player he understands the legacy.

“I was very young when he played and never got to see him play. I think I was one when South Africa won the World Cup in 1995,” he said.

“But for us, it was an era that opened up doors for us. We really appreciate all of them, and with the passing of James Small, we had him on the back as well against Australia.

“With Chester, I don’t think it’s any different. He is really inspirational to all of us as a team. We look up to the team of 1995 because we feel like they changed things for us in South Africa. We will always respect them.”