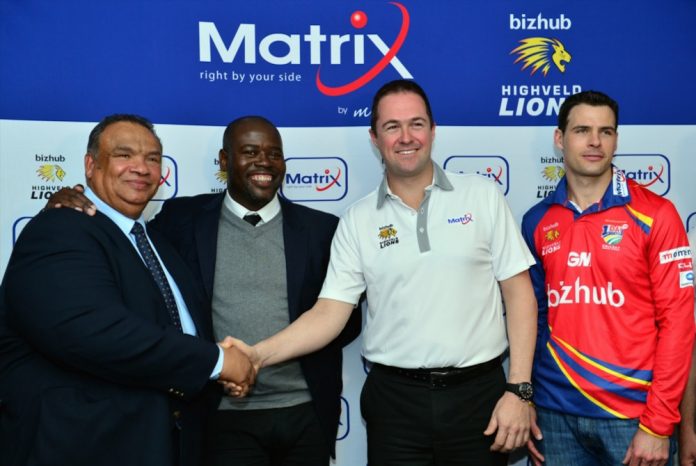 Today, Matrix, a brand of MiX Telematics – a leading global provider of fleet and mobile asset management solutions – announced its sponsorship of the bizhub Highveld Lions. This marks the second consecutive year that Matrix is the associate sponsor, in conjunction with the team’s naming rights sponsor and media partners accordingly.

“Given the success of last year’s sponsorship, the team’s success during the past season and the very strong brand association this holds for MiX Telematics, there was no doubt that this was a valuable sponsorship to pursue again this year,” says Grant Fraser, Product and Marketing Director at MiX Telematics (Africa).

The domestic cricket season kicks off on the 5th of October where the bizhub Highveld Lions will play their first game against the Cape Cobras in the annual Sunfoil Test Series at the Bidvest Wanderers Stadium.  As a result of the Matrix sponsorship, the team will feature the company’s logo on the collar of their shirts.

“There is no doubt that sporting organisations in South Africa are sternly reliant on the support of corporate South Africa to ensure we are able to deliver world class teams and, to this end, we believe that Matrix has played a pivotal role in the promotion of the team and in driving crowds to the stadium to stand behind the team. We are very excited to have them on board again this year,” says Greg Fredericks, CEO of the Gauteng Cricket Board.

“This year will be no different, as we plan to implement many more exciting initiatives that create a unique experience for Lions supporters attending the matches. We are examining activities – aligned to our sponsorship – that are underpinned by experiential activities for the supporters,” says Fraser.

“We are very proud to be associated with the bizhub Highveld Lions and look forward to a great season ahead, one that we believe is going to be very successful for the team,” concludes Fraser.