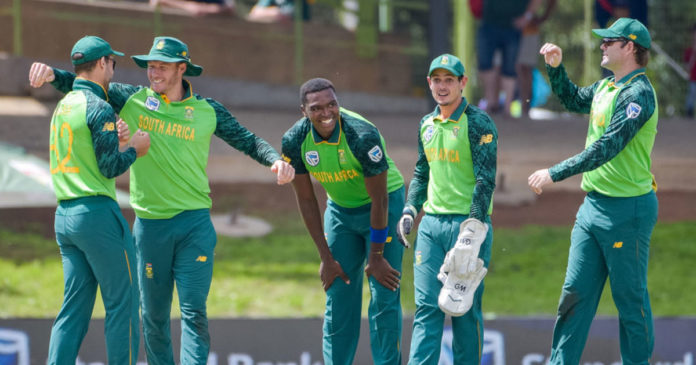 The Standard Bank Proteas repeated the recipe of the first Momentum One-Day International with a maiden ODI century, this time by Janneman Malan, and another brilliant bowling display by Lungi Ngidi to win the second match against Australia by a convincing six wickets with nine balls to spare.

In the process they won their first series of the home summer in any of the formats with a 2-0 lead going into the final match at Senwes Park in Potchefstroom on Saturday.

And there were several other key contributions coming from the likes of Heinrich Klaasen and Jon-Jon Smuts with the bat and all the bowlers with the ball.

But it was Malan and Ngidi, named joint Momentum Man of the Match, who produced two of the outstanding individual performances of the entire summer.

Having dismissed by the first ball of the match on his debut in the previous match, Malan showed both character and temperament of the highest calibre to set up the successful runs chase – what was a record chasing score for the Mangaung Oval.

He batted with great maturity in setting up the innings in partnerships of 91 with Smuts and then 81 with Klaasen. He reached his century off 124 balls with 3 fours and 3 sixes and then really cut loose thereafter as he scored a further 29 runs off just 15 balls with a further 3 fours and a six. His unbroken partnership with David Miller was worth 90 in exactly 10 overs and it was a rare occurrence for the experienced Miller to be the junior partner, not that he was off the pace with his 39 off 27 balls (3 fours).

Earlier in the day Ngidi had become the quickest South African to take 50 ODI wickets (in 26 matches) and he went on to finish with 6/58 to give him series figures to date of 9/88 in 20 overs.

The big thing about Ngidi’s contribution is that he is regularly getting rid of Australia’s key batsmen. There were good supporting roles from all of the other bowlers with Tabraiz Shamsi again bowling well into the final power play and Andile Phehlukwayo putting up his best performance of the summer.

The result was that Australia lost 6/49 in the final power play and that was the key statistic in analysing the outcome of the match and the series.

Australia had some good partnerships up front, sparked by the normal runaway start by David Warner and Aaron Finch but the Proteas always managed to break their major partnerships just when they were becoming threatening.