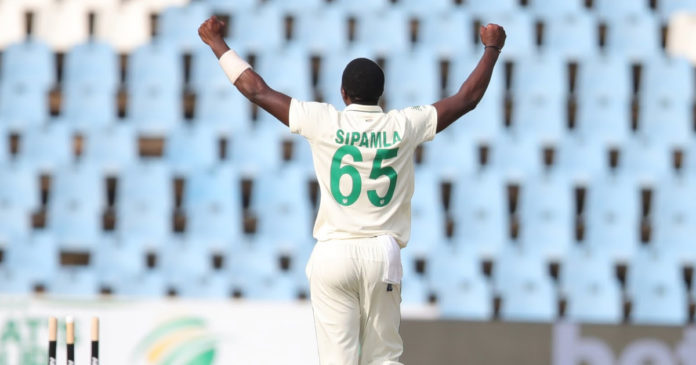 Lutho Sipamla grabbed three wickets to help the Proteas blow away Sri Lanka on the third morning before an attacking opening partnership sealed a resounding 10-wicket win in the second Betway Test at the Imperial Wanderers Stadium in Johannesburg on Tuesday.

Lungi Ngidi (4/44), Anrich Nortje (2/64) and Wiaan Mulder (1/52) all claimed a wicket each by the time the rookie paceman stepped in to dismantle the tail with his three for 40, which arrived within the space of six deliveries, bowling out the tourists for 211.

From that total, 103 runs (128 balls, 19 fours) came via the bat of captain Dimuth Karunaratne, whose 10th career century had for a long time given his side hope of setting a more competitive target than the 67 they ended with.

However, the home bowlers stuck to their guns and shot out the visitors in 56.5 overs, before Aiden Markram (36) and Dean Elgar (31) chased down the runs in just 13.2 overs – sealing South Africa’s first Test series win in four.

The pair began proceedings five ahead on 150 for four, with the overnight batsmen initially extending their fifth wicket partnership to 67.

Their stand eventually ended when Karunaratne was late on a pull and ended up skying Nortje to Mulder with the total on 176.

Five runs later and Dickwella’s loose shot saw him fall to Ngidi, with the rest of the line-up unravelling quickly, including Sipamla’s fine bowling to the tail.

Markram and first-innings centurion Elgar wasted little time in chasing down the target, helping the South Africans to a straightforward win.